From ALFA
Jump to: navigation, search 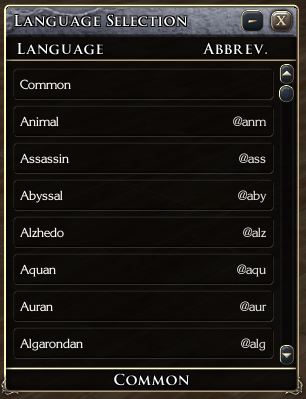 "Common language and culture defines a state just as much as borders, cities, and government do. Each major nonhuman race speaks its own language, and humans seem to generate dozens of languages for no other reason than their lands are so widespread and communications so chancy that language drift occurs over time. Hundreds of human dialects are still spoken daily in Faerûn, although Common serves to overcome all but the most overwhelming obstacles to comprehension." -- Forgotten Realms Campaign Setting

In A Land Far Away, creatures and players may speak a variety of languages. Some languages are granted automatically, depending on the character's background, while others can be learned.

A player may set their character's currently spoken language by clicking the @ symbol on their chat window, which will open up the ACR Language Selector. This UI will only show the languages that your character knows.

They may also include a special three-character code, while speaking. For example, @cel "Gods be with you." would automatically convert the character's speech to Celestial.

Languages may be learned by investing ranks in the Speak Language skill. This should only be done if your character has a legitimate way to learn the desired language, and has invested time to the pursuit.