Important note about your character's in-game knowledge of the Isles:
Accurate and useful maps of the Moonshae Isles are not commonly bought and sold on Gwynneth, and by many who dwell on the mainland the Isles are dismissed as a far-off and unremarkable backwater even by those who are residents of the great trading cities of the Sword Coast. However, those well learned of lore would no doubt have some knowledge of the geography of the Isles.
The local Ffolk, of course, have no need of maps; everyone knows where everything is, after all! An' anyone who don't know, well they must be a foreign'r, an' so they's not to be trusted no-how. 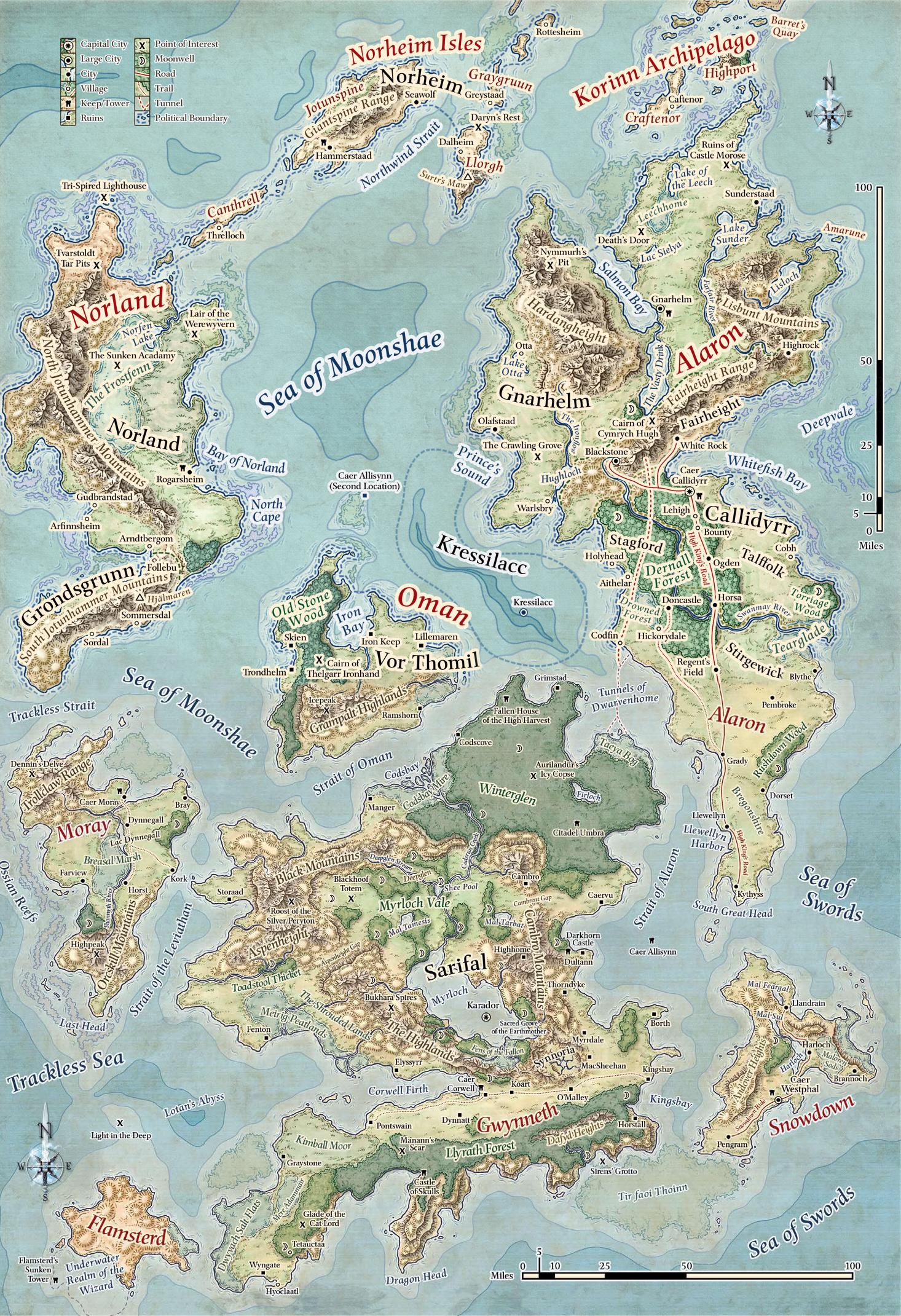 OOC note, 29/3/2021:
Our team, spearheaded by Bartleby, Stormbringer, Senor_T and Electryc, began re-building the mod mostly from scratch in late summer 2020. They were later joined by Zetamog and El Grillo.

One of the reasons for starting afresh, instead of just re-hosting and building on the pre-existing old mod, was so that the new Moonshaes can be built accurately to-scale with the canon map you see above. This follows the precedent set by Waterdeep and other servers, but as a standard approach we are using the largest possible area size NWN supports, in order to properly communicate to players a true sense of the grand sweep of landscape that makes up the Isles. By contrast, the old mod (being mostly built by more sane individuals than ourselves, and in a time when computing resources were more of an issue) took a more liberal attitude to the canon geography of the Moonshaes.

As of spring 2021, a large chunk of southern Gwynneth is already in-game and playable. Players of the original mod may recognise that the various separate areas which used to make up Corwell City have been salvaged, and are now stitched together into the single large contiguous city area you can see in the mod today. However, almost all other areas, including many of the Corwell city interiors, have been built from scratch.

At the time of posting, work is focusing on perfecting low-level content and filling the current map areas with things to do; you can check our releases thread for a highly abridged version of the additions, fixes and updates that have been made to the mod since launch.

However, there are a host of areas waiting to be given the finishing touches and be linked up to the mod. Much of our current content work is designed to allow us to more easily and quickly populate the new areas we will soon start adding.
Morevoer, other areas outside the initial launch zone of southern Gwynneth, including the epic location of High Home (the dwarf city in the Cambro Mountains of eastern Gwynneth) have been salvaged from the original mod and will be updated & making a return in due course.
As winter thaws and the mountain passes open up, those areas - together with many more brand new areas - will gradually be linked up and become visit-able by players, as we continue to expand the borders of the mod. In time, other islands will also become accessible as sea-routes open up.

Our aim is to bring as much of this characterful, epic setting to life as we possibly can.

We hope you enjoy exploring. Good luck on your second character!
UKTZ DM and builder on the ALFA1 server The Moonshae Isles. Contact me on Discord for any DM-related queries.