The Eve of Green-Grass

The Eve of Green-Grass

The festival of Green-Grass takes place on Gwynneth at the same time of year as it does anywhere else, within or without the bounds of the Isles; at the Vernal equinox, a time heralding the coming of spring.

During that time, the Ffolk are wont to gather upon the heath, between the Caer and the druids' grove outside of the great port city of Corwell, to dance, sing and make merry around great bonfires, shaking off the cold and damp of the long winter and (in theory at least) giving praise to their goddess and keeper, the Earthmother. 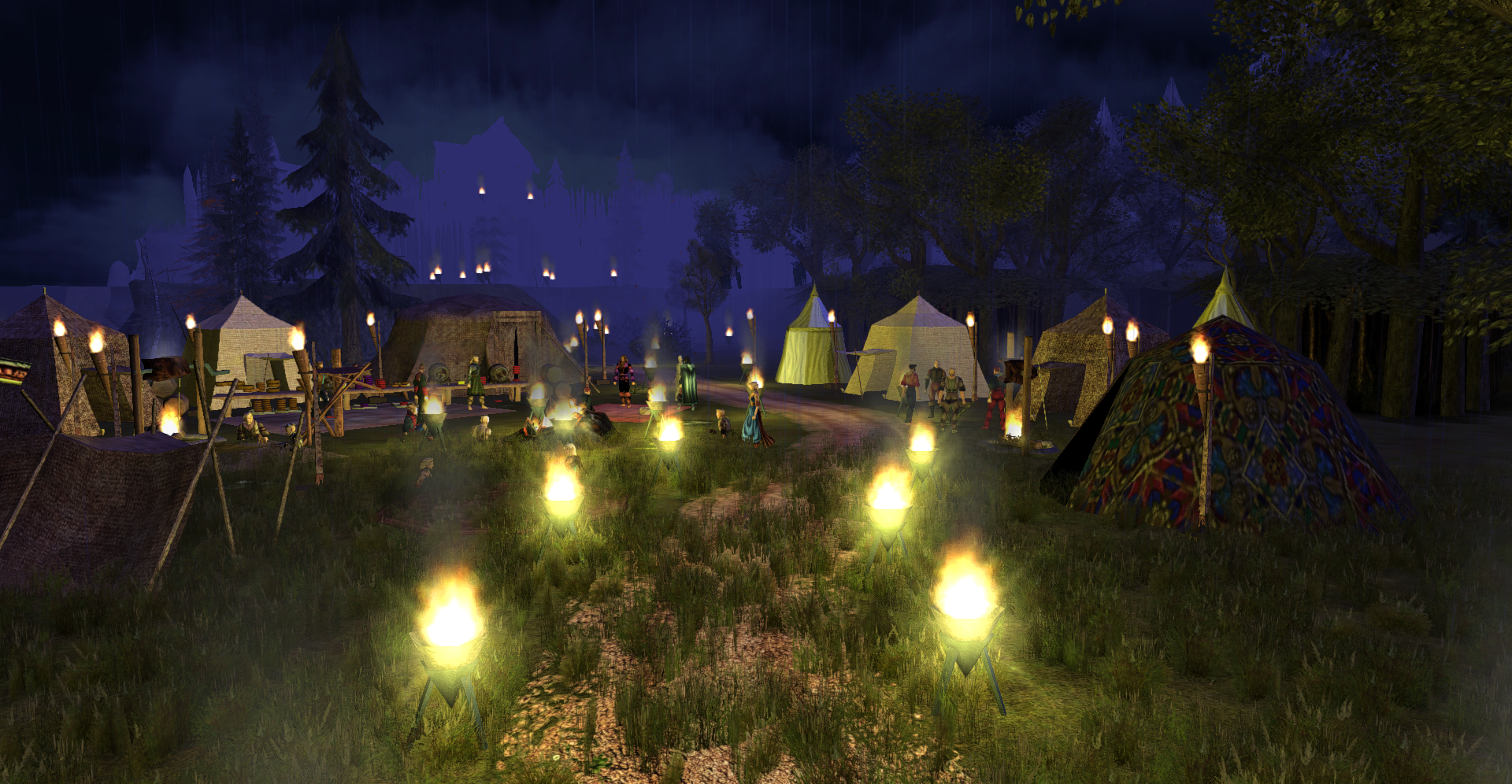 In recent years however, the old Ffolk say, many of the ancient traditions that surrounded the Green-Grass and other yearly festivals have fallen away, and to a cynical eye it might seem that now only the peoples' cavorting and merry-making remain of what once was a hallowed point in the year.

It was in that vein that a motley group of men, foreigners all to the Isles, were approached as they consorted with fair maidens and drinkers around the festive bonfires on that night which is knows as 'the Eve of Green-Grass' - though in truth, the night marks the first of a week-long fayre during which dancing and drinking is partaken of every evening by locals, and indeed oftentimes goes on so long that come sun-up hardy men and women still dance around the fires...

The group were approached by none other than master Eamon Wyndon, innkeeper at the Red Stag, an establishment known far and wide as the best watering hole and finest lodgings for travellers in all of Corwell.

With master Wyndon however, there came a much stranger visitor to the fayre; a woman, bent with age and seemingly quite incomprehensibly addled by time. Nan Emes is her name, and if anyone can remember a time when she did not make healing poultices and concoctions of herbs and funguses, selling them in a curiously flower-strewn cottage just outside the southern wall of the time, well, no-one has said.

Master Wyndon was looking for good men and strong, who could accompany the old woman on a difficult journey. A shrine to the Earthmother was once the site of rituals and offerings on the night of the Eve of Green-Grass, in times gone by when perhaps more heed was paid to the meaning behind the festive period rather than to the activities the festival itself provided an excuse for.

Though she seemed strange, humming and mumbling odd phrases and tunes, it was apparent to the fighting folk gathered on the green that Master Wyndon meant business, and would pay handsomely for their services in ensuring old Nan made it to the shrine of the Earthmother, lying as it did on the southern slopes of the great Dafyd Heights, nestled 'twix the trunks and boughs of the great trees of the Llyrath forest.

Quite why the innkeeper, a practical and level-headed man, was so insistent that the old woman was helped to complete her pilgrimage that night, none of the adventuring band did enquire, for gold he offered and simple seemed the task at hand.

Thus is was that four men; Koldast Aep Clagg, Rhys dan Selby, one known as 'Mr Black', and another unknown, as well as a strange and be-scarred half-orc by the name of Brother Eustace, set out with Master Wyndon and old Nan Emes. They headed first east, to the village of Koart not a stone's throw beyond the bounds of Corwell city proper, and the Tipsy Ludd inn. There they encountered one Rhodri, a drunken layabout by all accounts, who had once been Nan's apprentice.

For reasons unknown, the old woman felt it necessary that the lost soul that was her past apprentice must be set straight, and brought along upon the pilgrimage. After cajoling and some minor threats, young Rhodri was indeed set straight, and the party travelled on, south this time, and steadily away from the safety of warm hearth and good cheer, into the cold darkness of the Gwynneth night. 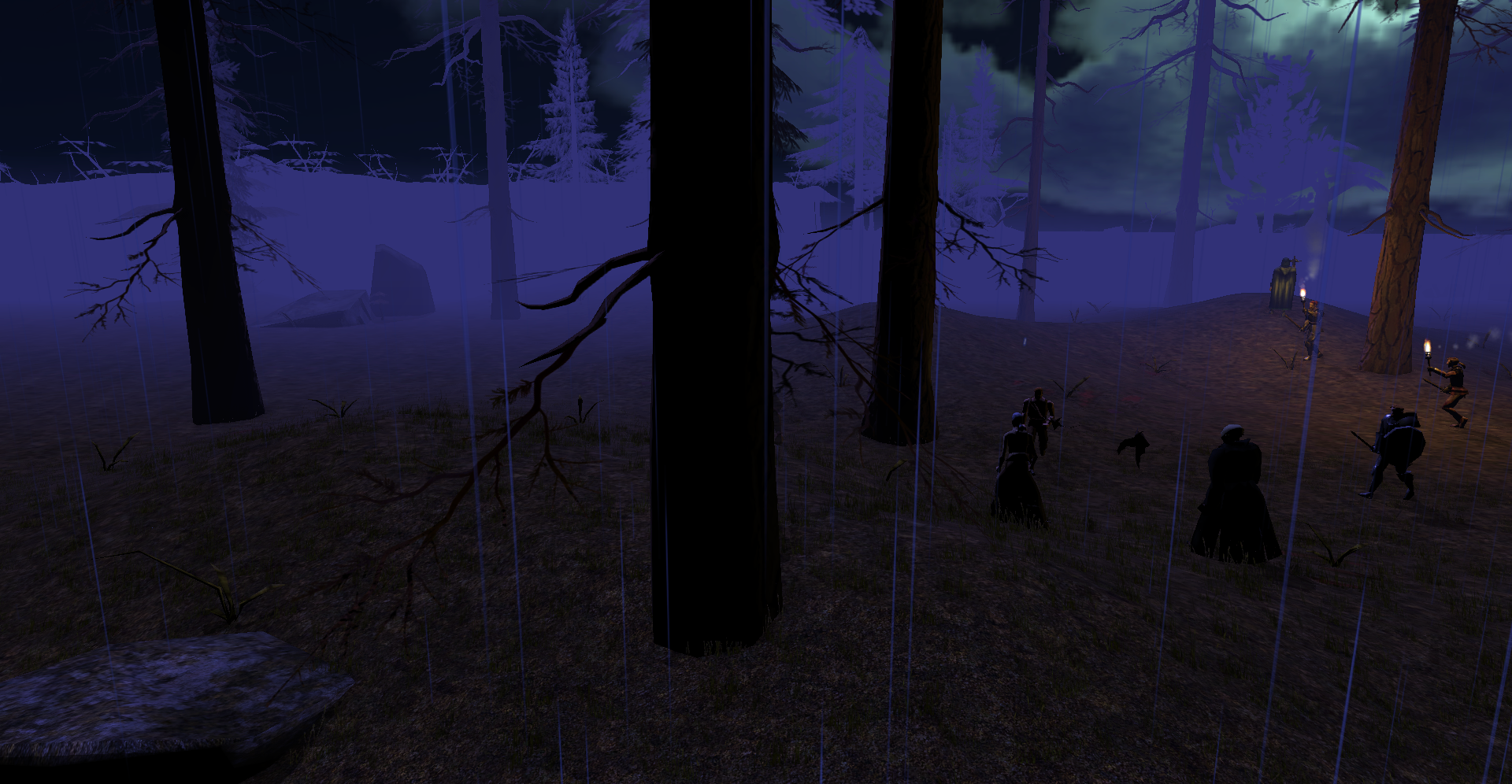 Soon enough, the band saw ahead the great looming boughs of the Llyrath forest. But afore they even entered into the darkness of those mysterious woods, they were set upon by creatures now familiar to all too many of the Ffolk and other residents of Corwell; bats, rabid and monstrous in manner, swooping down out of the air to scratch and claw at the faces and eyes of men and animal alike. Driven by some strange force the bats launched themselves at the men, but were quickly dispatched. Into the forest the company did proceed.

Heading east through the forest towards the foot of the great rocky ridge that forms the Dafyd Heights, the company was set upon at increasing intervals by menaces and threats of all kinds; huge spiders did burst out of the trees, launching themselves seemingly with a purpose and aim at one amidst the group. Nan Emes, of course, was the target, though for all her burbling and humming no member of the group could say what drove the beasts against her, nor of what true import all their increasing troubles could be.

After braving bandits and further monstrosities in the dark of the Llyrath, the company came at last to the base of the western tip of Dafyd Heights. The forest was thick, and the darkness near-impenetrable, the men having long since burned out the few torches and kindling they had brought with them.

Amidst the tangle of trees and undergrowth there, at the foot of the once-sacred Heights, a further and altogether unexpected threat came upon the warriors. Massive, overgrown wolves and betusked boar-creatures did begin to hurl themselves out of the inky darkness of the forest night, attacking with a terrifying ferocity as they attempted to devour those brave souls who had thought to complete the Earthmother's pilgrimage on that fateful night.

Many nearly fell, and indeed the boy Rhodri was taken, his heavy body dragged mercilessly screaming into the darkness by one of the terrible, corrupted wolf beasts.

At the last, they could go no further, for it was clear some malevolent force was aimed against those men and their precious escort that night. The retreat was called, and turning they did flee. But even as they did so, out of the forest came once more a mighty slavering wolf-like beast, tearing through into the midst of the company.

The beast's aim was true, for to the horror of all assembled, it fell upon old Nan Emes, its snapping jaws closing upon the weak and trembling form of the old woman. The warriors cried out, and even as its grizzly task was completed the swords of justice were driven into its heart, ending it upon the spot. But the toll had been taken, and Nan Emes's blood wetted the ground of the Llyrath on the Eve of Green-Grass, as should not have been so.

The howls and hideous cries of the monstrous beasts that had beset them fading into the night, the company searched then for Nan Emes's body so that they might at least bring her out from that dire place. But of the old woman's form, they could find nothing; though their hands searched frantically through the grass around the body of the beastly horror that had felled her, their fingers met only the wet blood she had shed upon her end.

Despondent and broken, the party travelled back. The ghastly night, it seemed, had settled; perhaps the purpose of the force that had set so fiercely against them was complete, and neither beast nor bandit troubled them again as they trudged, weary and dejected, back to the city from whence they had came.

Yet, even as they came upon the southern wall of the city, a sight stranger than strange sat, waiting to meet the company. For, in her customary rocking-chair beneath flower-strewn eves, was Nan Emes. The old woman sat, apparently quite unharmed, rocking gently in the morning air, humming as ever her strange and wandering tune.

The men were amazed, but as to her apparently miraculous survival, and her timely reappearance, the old woman appeared unable, or perhaps simply unwilling, to impart any insight.

Indeed, Nan Emes sat upon her chair, smiled, and said but two words to the men; words she had repeated over and over during that terrible night, as the creatures of darkness did descend on her protectors with ravening howls and untrammeled rage: 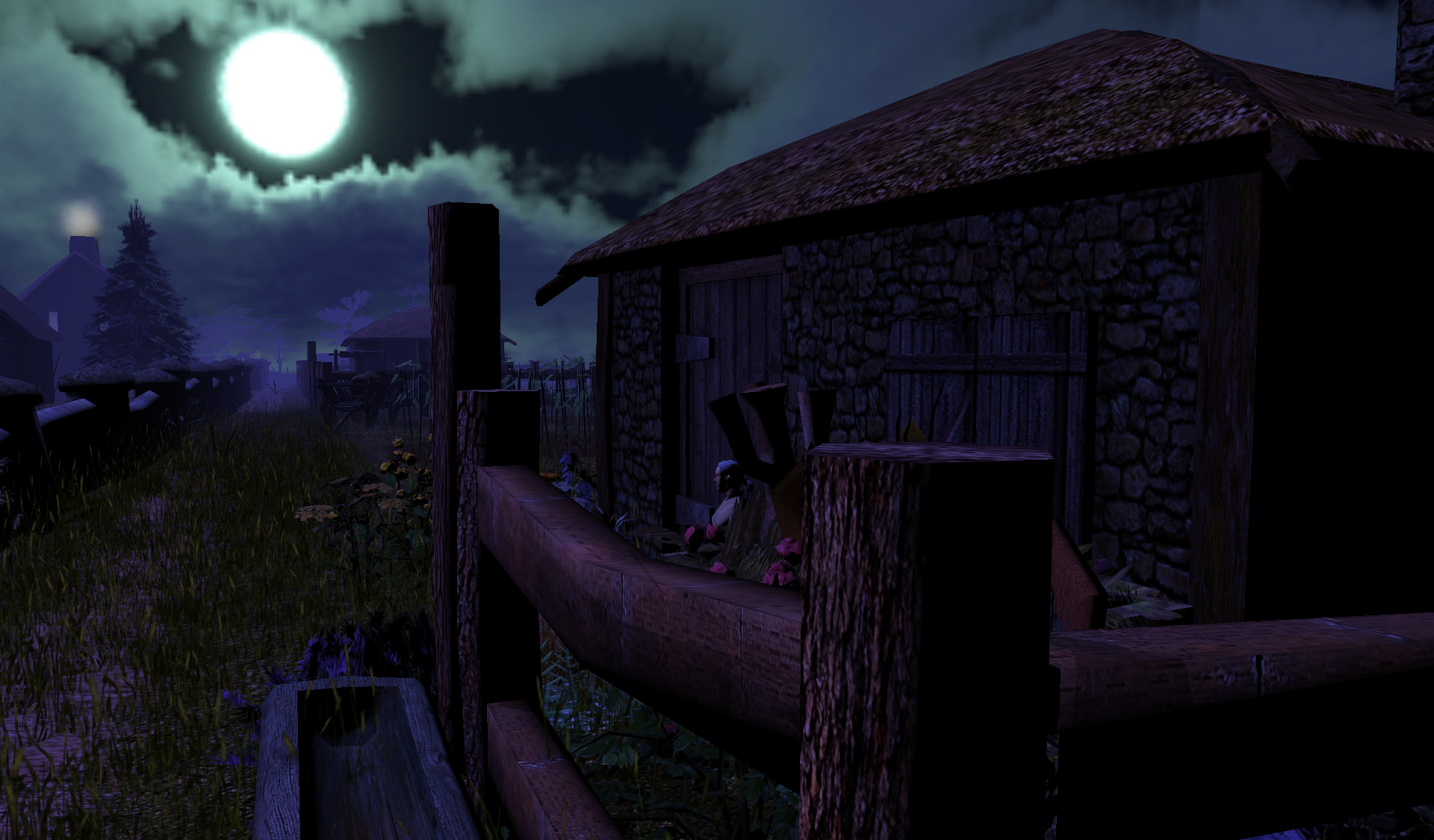 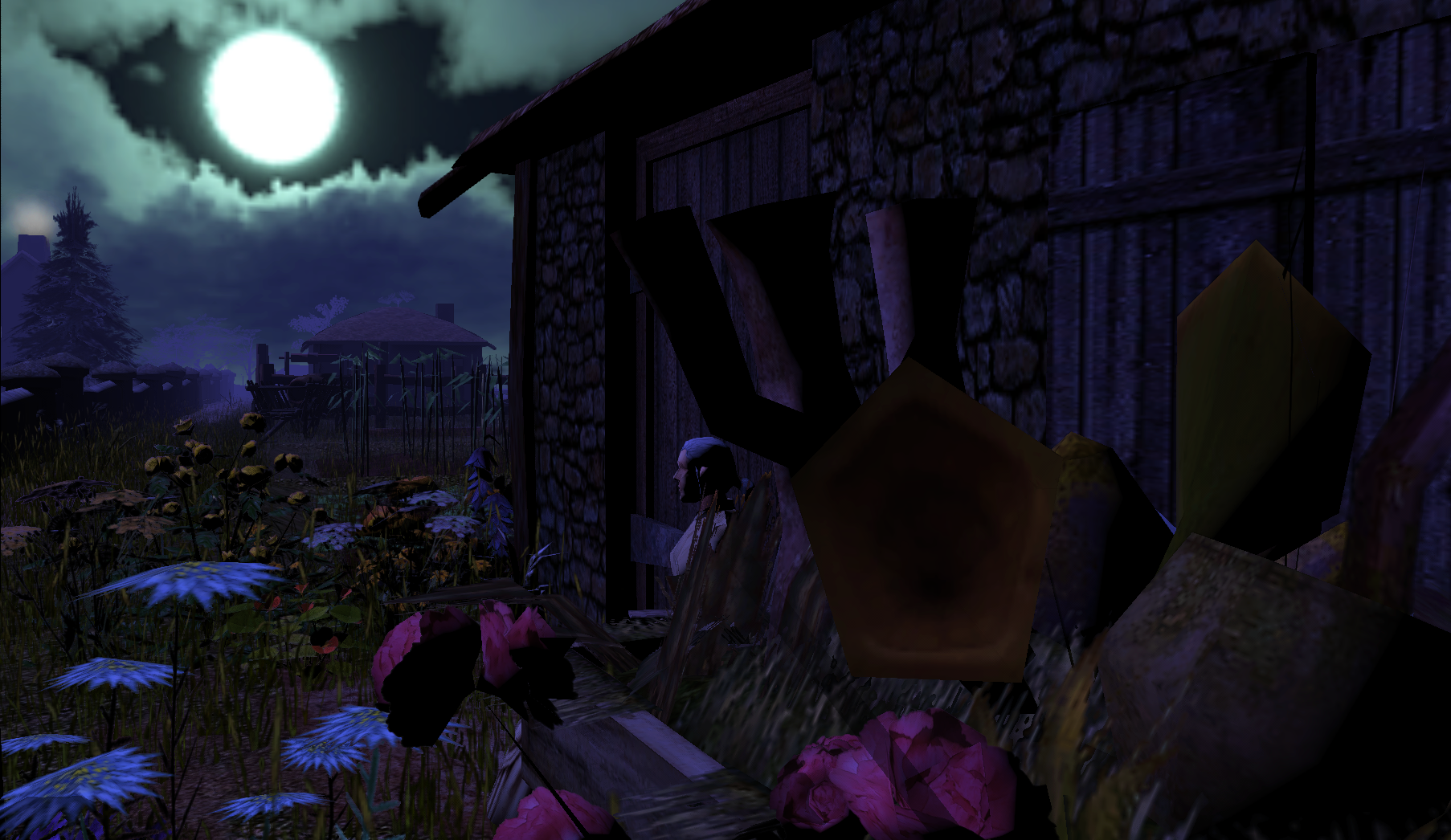 'Dark... feet...'
-Nan Emes
UKTZ DM and builder on the ALFA1 server The Moonshae Isles. Contact me on Discord for any DM-related queries.