Elyas sat at his usual table, the chatter and laughter of the inn's occupants around him standing in stark contrast with his own blanket-wrapped quietude. He slowly raised the tankard from rough wooden table surface to his lips. The hand holding the tankard shook a little and he let it drop, all his attention fixed on the book he held propped in his left.

'The Abbey of Chauntea was one of the city's oldest buildings, built in the Year of Waving Wheat (574 DR) during the era of..'

as he turned the page, a scrap of note paper fell from the dry leaves of the book. He glanced at it as it settled on the table, then looked again. It was a half-finished note to Gael. Why had he been writing a note to his friend?

As he scanned his own handwriting, a word pricked out at him.
'Blademas-' Elyas stopped reading before he finished the word. His mouth twisted a little, the hand holding the tankard banging it carelessly back onto the table as he grabbed the note, crumpled it in a shaking fist and threw it into a nearby fireplace. He did not look to see the parchment curl up in flame, and perish.

Shaking himself, the young half-elf settled back down in his chair and turned once again to the book. In it lay one part of what he sought. He felt as much.

As he drew a breath and tried to focus bleary eyes once more upon the page, a sound pricked his ear. Just faintly, as at a distance. Something outside in the square perhaps.

A singer of some kind, hawking for coins at the feet of Kerrigan's statue no doubt. His eyes focused on the ragged page before him.

'The abbey fell in fire and ruin during the Second Troll War and was never rebuilt...'

There is was again. Elyas frowned, his still-boyish features turning a little in the direction of the noise. It felt.. familiar, somehow. Like a song he once knew...

The pale face stared at him, closer and closer

Elyas was frozen in his chair. Around him, half-drunken laughter and merriment continued as a group of tavern-goers raised a fresh round of ales.

A sickening crunch, as the heavy dark blade landed across his shoulder and chest. Bone, shattered. Sinew tore.

In the flickering firelight of the Safehaven, Elyas's left hand slowly lowered to the hilt of the rapier at his waste. The half-elf himself, did not notice.

The page of the book before his eyes no longer existed. Only visible were the other's eyes. Dead, pale eyes, looking into his. Closer, and closer.

As if he was a thousand miles away from his own body, Elyas felt his left hand tightened still further.

The Pale One's voice rang in his skull like a choir pealing out a temple song, like a cold, desolate cry from an icy mountain-ledge high above; like the blackest, foulest thing he could imagine hearing. He could not stop it. Could not.. feel.

His grip on the hilt was as iron now, his other hand shook as he tried to reach for his tankard - something to drown out the noise, something to forget...

A thumb, running over the outline of an engraved letter, sunken into the wood between two lines of silver inlay.

A hilt, wood with an engraved shape of a letter.

The hilt of his - her sword.

That shape. A downstroke, then an up.

He blinked, for the first time in what seemed like forever. He breathed, following again with his thumb that line; down, then up.
Down, then up.

Slowly the world came back into focus.

The noise of the tavern filtered back into his mind, and that.. other.. voice, drifted away. As the last remnants of it left his ears, he shuddered as if doused in icy water.

Elyas reached for his cup, hand still shaking. Finally he was able to grasp it and bring it to his lips, taking a long, gasping gulp.

With a great effort, he slowed his breathing. Gradually, he was able to bring his gaze back to the weathered volume lying on the table before him. Blinking again, he gingerly reached and brought the book up into the candle light.

He stopped, and looked up.

His left hand still grasped the hilt that sat at his hip.

For a long moment he sat stock still, one thought flowing through his mind almost as clearly as the haunting voice had done not a moment earlier.

But this was no paralysing memory.

With purpose, and a vigour that belied his palid and uncertain frame, he stood, folding the book and downing his drink. Tossing a few coins on the table, he strode out of the Safehaven without a backwards glance, hand still grasping hilt at his side as he walked.

He needed to find that smith.
He needed... something more.

Because next time, things would go differently.
Next time, in the end, -it- would be the one left lying on that cold, hard stone.
UKTZ DM and builder on the ALFA1 server The Moonshae Isles. Contact me on Discord for any DM-related queries.

Re: The long road home

Elyas stood on a small mound of earth, looking out towards the swamp that townsfolk called the Rat Hills.

It seemed only fitting.

Without a sound, he fished a small, intricately carved ring out of his belt pouch. He held it in his palm, and stood there for a long while, just looking at it. It weighed next to nothing. Just a thing.

Eventually his gaze slid past his palm and rested upon the dirt beneath his boots. Clean enough, for dirt. Not tainted by the noxious, oily water of the nearby town dump. As good a spot as any.

He glanced back at the ring in his hand. His jaw clenched involuntarily, then after a moment's hesitation, he bent down, and lightly laid the ring on top of the mound. His bare fingers pushed it down slightly into the dirt. Then, simply and quietly, as a child would, he mounded up small handfuls of soil, covering over the ring until it was hidden from view, and then patting down the earth, until little sign remained that the object had every been there at all.

Elyas sat back on his haunches and gazed at the place where his old friend's ring was buried, until he could look no more, and his boyish face dropped, tears rolling quietly down pale cheeks and dropping in stillness upon the ground.

After a time the boy scrubbed his face clear with his sleeve, and then slowly stood, rubbing at a the top of his chest just a bit, as if trying to soothe a wound long scarred over.

Finally, barely audible, as the dusk settled over the towers of the great city at his back, he whispered, "...goodbye."

Without another word, the young man turned away from the hills, walking briskly up onto the quayside at the very southern edge of town. Up onto the wooden jetty he strode, black cloak whipping behind him in the rising evening breeze, nodding just barely to the captain standing by the gangplank as he took to its steps and clambered aboard the small vessel on which deckhands were already hustling about, calling in coarse voices to each other as last-minute cargo was stowed and lines were made ready to slip.

Elyas leant quietly on the rail up front. He faced out to the Sea of Swords, turned away from his home, from the City of Splendours, from friends and foes, dreams and adventures, hopes and failures. The sprightly boat moved under him, and turned its prow out, towards to the setting sun, tracing a wide curve across the harbour, sweeping around and out toward the western horizon.

He didn't look back once. But occasionally, one of the boys manning rope or tiller would glance at him as darkness fell, standing there still as a shadow, facing out to nowhere. And often enough they began to remark to one another, saying what was he looking for, this odd boy, near enough a man - or what was he running from?

But those aboard with keener eyes may have noticed something about the expression of that young half-elf, and may have stayed a second longer to look, and perhaps might have wondered what was the reason for the firm-set expression he now bore. And perhaps too the thought may have arisen, in one or two of the older sailors' minds, as to why when the young half-elf and all the rest of them were setting out across treacherous waters, out along a wavering path across shifting seas, still yet this quiet figure by the railings gave every impression as if he were right at home, as if he knew exactly where he was, and had all he needed, right with him, there on his own person... though even about him no bags or crates showed signs that he had any worldly possessions at all save what he wore on his person.

Then might a wiser eye see, in the rare moment when Elyas's left hand was not itself grasping the hilt, a rapier fine and old that sat upon his left hip. And if they looked closer still, just a little closer.. they might see a letter, carved into the dark wood of the hilt itself. A letter worn smooth, as if ever and again, a thumb had traced its path a thousand times a thousand more.

So on travelled the young man, and his curious companions; on and on, down that long unbidden road, into the night. 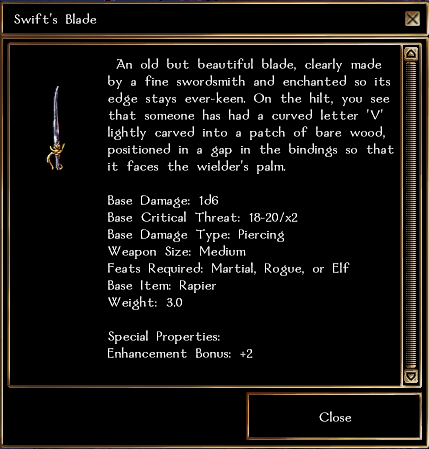 UKTZ DM and builder on the ALFA1 server The Moonshae Isles. Contact me on Discord for any DM-related queries.