On the board in the Safehaven Inn has been left a note, written hastily in a competent but almost child-like hand.
Regulars at the watering hole say that a young, earnest-looking half-elf was seen to dash through the door in the middle of the night and furiously pen the missive before leaving again, muttering all the time about *honour* and other such outdated and cliched matters: 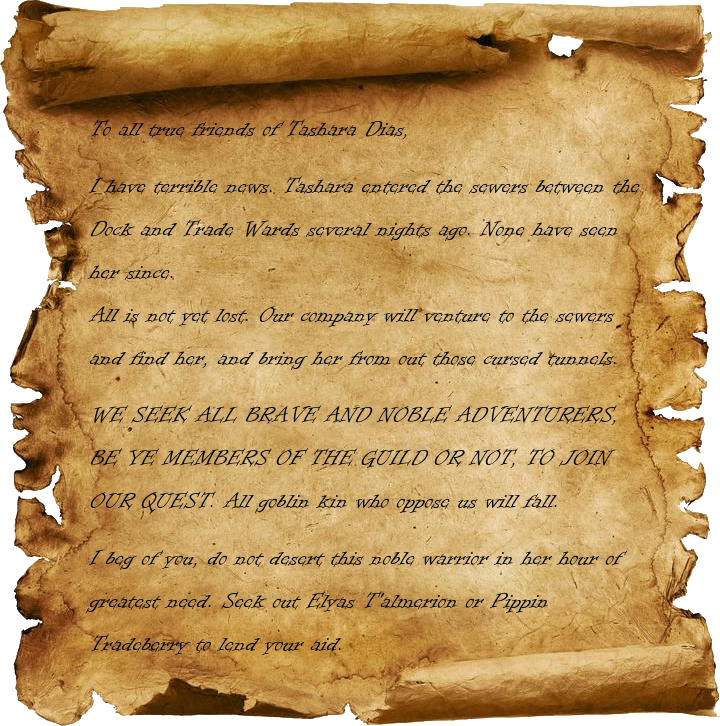 Re: *hastily scrawled note on Safehaven notice board*

The notice has now been removed.

Inn regulars at the Safehaven say that the writer of this notice returned at dusk several days later. He quietly walked up to the board with a look of great sorrow on his face, and despondently tore down the scrap of paper he had pinned there.

One of the barmaids later recounted to the common room how only a few hours earlier she had seen the young half-elf, covered in grime and sewer muck, staggering into the Adventurer's Guild... with the lifeless body of a dark-skinned woman, bloodied with the marks of many goblin-arrows, slung over his shoulder.
"Truth! Justice! Freedom! And a Hard-boiled Egg!"