The following is a list of observations that I've come across throughout my time playing a druid in WD. It includes some issues of spells that are not working as intended and some guesses as to why that might be. Also, I included some features that exist in both NWN EE and D&D 3.5 SRD, but are not listed the same. I know Stoneskin was modified to match SRD instead of NWN, so these additional items could be considered to follow suit.

-Magic Fang/Greater Magic Fang - ALFA modified spell no longer works on any creatures (animal companions, summoned creatures, AE dominated or bridled creates, etc.) presumably because the spell was modified when ALFA used the equipable "claws" and "bite" items on creatures, and the spell was meant to target that. Reverting to the original NWN spell may fix it.
-Camouflage - Duration says 10 Turns/level. It does not last that long.
-Calm Animals - Doesn't say "RP only" in description, but does not appear to have any in-game effect on animals.
-Awaken does not work at all. The NWN spell is designed to work only on the NWN animal companions. It does not recognize ALFA's modified animal companions as qualifying creatures. However, the 3.5 SRD Awaken works on *all* plants and animals, so a modified spell that works on any of the druid's creatures would be in line with canon.

-2nd Level - Endurance, Cat's Grace, and Owl's Wisdom are not NWN Druid Spells but are 3.5 SRD Druid Spells
-4th Level - Ice Storm is a 4th level spell in 3.5 SRD but 5th level in NWN. This is an opposite but identical issue as the Stoneskin modification.
-I don't know the NWN/ALFA druid spell lists for 6+ so I can update as I learn them.

-Skills - 3.5 SRD Druids have Listen and Spot as class skills, NWN Druids do not.

I'm not complaining or demanding that anyone rebuild the ALFA druid from the ground up. This is just a complete list of data so we have it. If some spells can get fixed because of it, all the better.
Current PCs: Caliope, Birdsong, Bjolan Agnarr, and Maximorticus Vanpewter Rubblebottom the Sixteenth.
Top

Weapons tab of store inventory shows two goblets, both have a bad Strref. 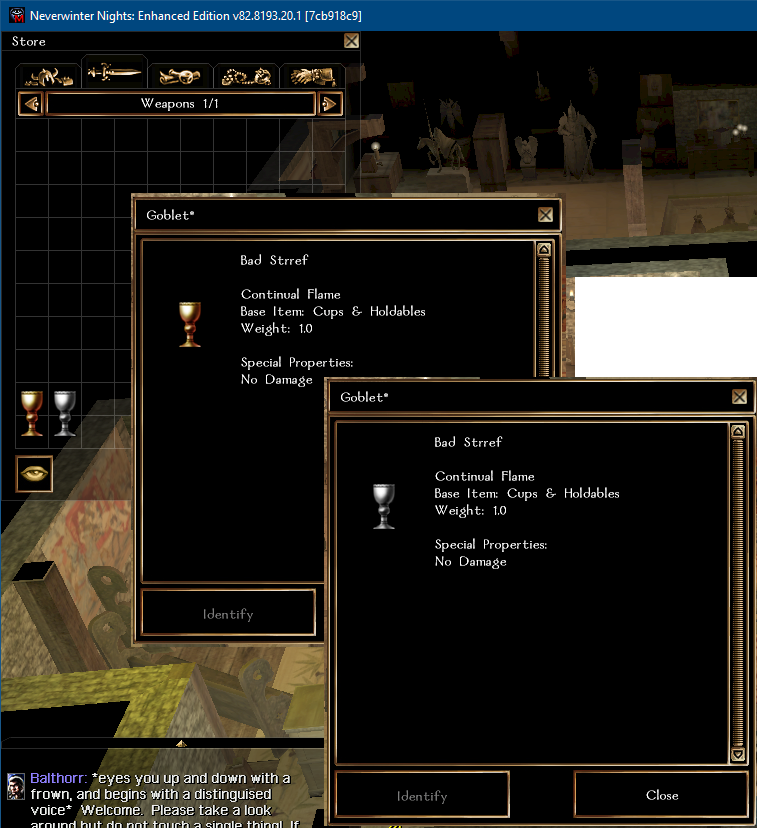 In WD the following city area maps are not auto shown after reading the city map (so they still have the fog of war)
Also...

While brewing, creating an Acid Breath potion will take a stack of 10 acid flasks instead of 1.
12.August.2015: Never forget.
Top

Hi folks, in Shadowdeep, the Moon Door on the Middle East Wall of Southern Ward 3P doesn't seem to work. It flashed and made the happy Moon Door sound when Sarenna touched it (both sides), but it did not port her back to the Material Plane. I have a picture I can send you of its location if you need it.
Character arcs are sharp, pointy little things. A little blood may spill!

JMecha's description from the scripting states, for Masterwork Racial Bonuses:

Some Racial perks
d100 is rolled + Craft Armor Ranks and if you beat a 70 the Armor will either grant....

Human Racial Bonus is broken if you pop the same skill. The added skill bonus does not stack. For example, Cornelius made a large shield which popped the initial skill bonus plus the racial bonus. Both bonuses ended up being swim bonus. They were both +2 and they do not stack. See screen shots:

Swim skill without shield, no armor.

Swim skill with shield, no armor:

"Having an adventure shows that someone is incompetent, that something has gone wrong. An adventure is interesting enough in retrospect, especially to the person who didn't have it; at the time it happens it usually constitutes an exceedingly disagreeable experience." Vilhjalmur Stefansson
Top
Post Reply
127 posts